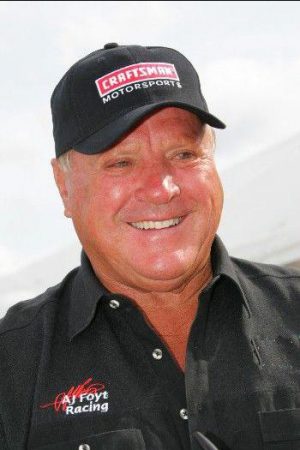 Anthony is alive and kicking and is currently 88 years old.
Please ignore rumors and hoaxes.
If you have any unfortunate news that this page should be update with, please let us know using this .

Anthony Joseph "A. J." Foyt, Jr. (born January 16, 1935) ("Super Tex") is an American retired automobile racing driver. He raced in numerous genres of motorsports. His open wheel racing includes United States Automobile Club Champ cars and midget cars. He raced stock cars in NASCAR and USAC. He won several major sports car racing events. He holds the USAC career wins record with 159 victories, and the American championship racing career wins record with 67.
Foyt is famous for winning the prestigious 24 Hours of Le Mans race in his first and only attempt, in 1967; Foyt drove a Ford GT40 Mk IV, partnered with Dan Gurney and entered by Carroll Shelby's team. Prior to the race, he had angered the French fans and press by remarking that the notoriously fast and dangerous tree-lined course was "nothin' but a little old country road."

Also, he reportedly only got 10 laps of pre-race practice. But when Gurney overslept and missed a driver change in the middle of the night, Foyt was forced to double-stint and wound up driving nearly 18 hours of the 24-hour race. Foyt also later won the 12 Hours of Sebring and 24 Hours of Daytona in 1985 driving Porsches, making him one of only 12 drivers to complete the "triple crown" of endurance racing.
Foyt has numerous career records at the Indianapolis 500: the first of to date three drivers to have won a record four times, the most consecutive and career starts (35), most races led (13), most times led during the career (39), and most competitive laps and miles during a career (4,909 laps, 12,272.5 miles). In the 1961 Indianapolis 500 Foyt won over Eddie Sachs with a lead of 8.28 seconds, the second closest finish in Indianapolis history at the time. Shortly thereafter, Foyt and Ray Harroun (who won the first Indianapolis 500 in 1911) appeared together on a segment of the TV program I've Got a Secret—their secret being their respective wins 50 years apart.