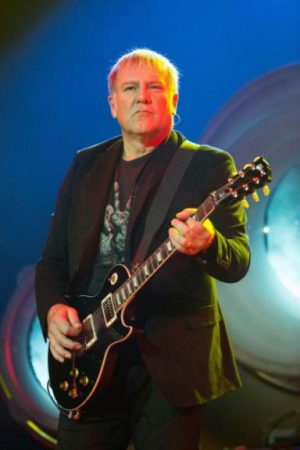 Alex is alive and kicking and is currently 68 years old.
Please ignore rumors and hoaxes.
If you have any unfortunate news that this page should be update with, please let us know using this .

Does Alex Lifeson Have the coronavirus?

Aleksandar Živojinovi?, OC, better known by his stage name Alex Lifeson, is a Canadian musician, best known as the guitarist of the Canadian rock band Rush. In 1968, Lifeson co-founded the band that would become Rush, with drummer John Rutsey and bassist and singer Jeff Jones. Jones was replaced by Geddy Lee a month later, and Rutsey was replaced by Neil Peart in 1974; the band's lineup has remained the same ever since.
On New Year's Eve 2003, Lifeson, his son, and his daughter-in-law were arrested at the Ritz-Carlton hotel in Naples, Florida. Lifeson, after intervening in an altercation between his son and police, was accused of assaulting a sheriff's deputy in what was described as a drunken brawl. In addition to suffering a broken nose at the hands of the officers, Lifeson was tased six times. His son was also tased repeatedly.

On 21 April 2005, Lifeson and his son agreed to a plea deal with the local prosecutor for the State's Attorney office to avoid jail time by pleading no contest to a first-degree misdemeanor charge of resisting arrest without violence. As part of the plea agreement, Lifeson and his son were each sentenced to 12 months of probation with the adjudication of that probation suspended. Lifeson acknowledged his subsequent legal action against both the Ritz-Carlton and the Collier County Sheriff's Office for "their incredibly discourteous, arrogant and aggressive behaviour of which I had never experienced in thirty years of travel."
Although both actions were initially dismissed in April 2007, legal claims against the Ritz-Carlton were reinstated upon appeal, and ultimately settled out of court in August 2008, with Lifeson and his son agreeing to a confidential settlement from Ritz-Carlton. In his journal-based book Roadshow, Peart relates the band's perspective on the events of that New Year's Eve.