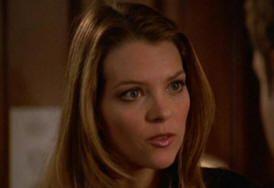 Amelinda is alive and kicking and is currently 49 years old.
Please ignore rumors and hoaxes.
If you have any unfortunate news that this page should be update with, please let us know using this .

Amelinda Smith (Amelinda Embry) is an actress, known for Romy and Michele's High School Reunion (1997), Buffy the Vampire Slayer (1997) and Bewitched (2005). She has been married to Tyler Parkinson since February 13, 2010.
Amelinda plays Jennifer (My Day Off) on Scrubs. Amelinda Embry, now Amelinda Smith has performed in a handful of productions. She is best known for her role in Buffy the Vampire Slayer. She can also be seen in an episode of Two Guys, a Girl, and a Pizza Place, and the film Romy and Michele's High School Reunion.

She was previously married to Ethan Embry. She gave birth on December 10, 1999 to Cogeian Sky Embry. His name comes the same root word as "cogent" which is "cogeo". It means force, power, influence, and drive.