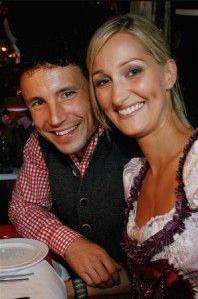 Andra is alive and kicking.
Please ignore rumors and hoaxes.
If you have any unfortunate news that this page should be update with, please let us know using this .

Andra Van Marwijk is Mark van Bommel's wife. They got married in 2001 and have three children so far; Thomas, Ruben and Renée.
Mark van Bommel is a Dutch football coach and former player who played as a midfielder. Van Bommel won the 2005–06 UEFA Champions League with Barcelona and was part of the Netherlands team that finished runner-up of the 2010 FIFA World Cup.

Andra is the daughter of Bert van Marwijk. Bert van Marwijk is a Dutch football manager who last managed United Arab Emirates national team. As a footballer, he played for the Go Ahead Eagles, AZ, MVV and Fortuna Sittard amongst other clubs, and represented the Netherlands once.