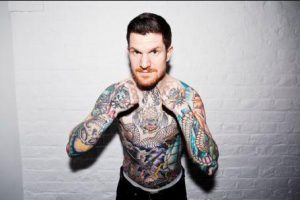 Andy is alive and kicking and is currently 42 years old.
Please ignore rumors and hoaxes.
If you have any unfortunate news that this page should be update with, please let us know using this .

Andrew John "Andy" Hurley (born May 31, 1980) is an American musician and drummer. He is best known as the drummer of the Chicago-based rock band Fall Out Boy. Prior to Fall Out Boy, Hurley played in several hardcore punk bands. He joined Fall Out Boy as the full-time drummer in 2003 and was in the band's lineup until its hiatus in 2009. Following that, he formed the heavy metal supergroup The Damned Things with Fall Out Boy guitarist Joe Trohman; the group went on hiatus after its debut album, Ironiclast (2010), due to band members focusing on their original bands' new album cycles. Hurley moved on to hardcore punk band Enabler which released a debut album and toured in 2012. Fall Out Boy regrouped and announced a new album and tour on February 4, 2013. The band's fifth studio album, Save Rock and Roll, was released April 16, 2013, with the punk EP PAX AM Days announced on September 30 and was released on October 15 the same year. The band's sixth studio album American Beauty/American Psycho was released on January 16, 2015 and debuted at No. 1 on the US Billboard 200.