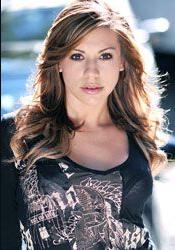 Angel is alive and kicking.
Please ignore rumors and hoaxes.
If you have any unfortunate news that this page should be update with, please let us know using this .

Angel Reed can currently been seen in the hit show Rock of Ages on Broadway. She was one of three girls in her cast who were nominated for an Astaire Award for Best Female Performer's. Her journey with Rock of Ages began a few years ago when the show did a brief run in Las Vegas at the Flamingo Hilton. More than two years after the show closed in Vegas, she made the move from LA to NY to join the cast Off Broadway. Now on Broadway the show has earned 5 Tony nominations and has appeared on Conan O'Brien, The Today Show, Regis and Kelly, The View, The 2009 Tony Awards and Rachel Ray. Needless to say, the 2 year wait was well worth it! Since being in NY, Angel has also played the role of Tai in a reading for 'Clueless' the musical, the role of Spicy Stacy for a 'White Castle' commercial, and has appeared with her cast in Broadway Cares Equity Fights Aids Gypsy benefit. Her cast has created a comical web series and can be seen on youtube under Rock Of Ages Productions.Other shows include 'A Pass Port to Las Vegas' ( a European USO Tour), Nat Tour of 'Saturday Night Fever' ( Maria Huerta), 'Wonderland' ( Harrah's Reno), 'Knott's Scary Farm', 'Debbie Does Dallas', 'Chicago' (Go To Hell Kitty), 'West Side Story' at 5th Avenue Theater. Angel has danced for Target in 2 National Commercials, Eve, That 70's Show, Three 6 Mafia and Poison at the 2009 Tony Awards.