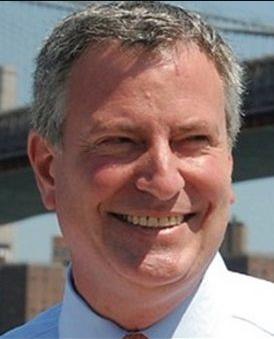 Bill is alive and kicking and is currently 60 years old.
Please ignore rumors and hoaxes.
If you have any unfortunate news that this page should be update with, please let us know using this .

Does Bill de Blasio Have the coronavirus?

Bill de Blasio (born Warren Wilhelm, Jr., May 8, 1961, later renamed temporarily "Warren de Blasio-Wilhelm") is an American politician who is serving as the 109th mayor of New York City. From 2010 to 2013, he held the citywide office of New York City Public Advocate, serving as an ombudsman between the electorate and the city government. He formerly served as a New York City Council member, representing the 39th District in Brooklyn, which contains Borough Park, Carroll Gardens, Cobble Hill, Gowanus, Kensington, Park Slope, and Windsor Terrace. De Blasio, the Democratic Party nominee for mayor of New York City in the 2013 election, defeated Republican Joe Lhota with more than 73 percent of the vote. De Blasio is the first Democratic mayor of the city since David Dinkins was in office from 1990 to 1993.