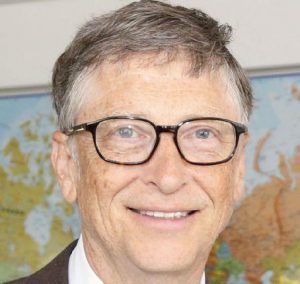 Bill is alive and kicking and is currently 66 years old.
Please ignore rumors and hoaxes.
If you have any unfortunate news that this page should be update with, please let us know using this .

Does Bill Gates Have the coronavirus?

Gates married Melinda French on a golf course on the Hawaiian island of Lanai on January 1, 1994; he was 38 and she was 29. They have three children: Jennifer Katharine (b. 1996), Rory John (b. 1999), and Phoebe Adele (b. 2002). The family resides in a modern design mansion, which is an earth-sheltered house in the side of a hill overlooking Lake Washington in Medina near Seattle in Washington state, United States. According to 2007 King County public records, the total assessed value of the property (land and house) is $125 million, and the annual property taxes are $991,000. The 66,000 sq ft (6,100 m2) estate has a 60-foot (18 m) swimming pool with an underwater music system, as well as a 2,500 sq ft (230 m2) gym and a 1,000 sq ft (93 m2) dining room.
In an interview with Rolling Stone, Gates stated in regard to his faith:
"The moral systems of religion, I think, are super important. We've raised our kids in a religious way; they've gone to the Catholic church that Melinda goes to and I participate in. I've been very lucky, and therefore I owe it to try and reduce the inequity in the world. And that's kind of a religious belief. I mean, it's at least a moral belief."
In the same interview, Gates said:
"I agree with people like Richard Dawkins that mankind felt the need for creation myths. Before we really began to understand disease and the weather and things like that, we sought false explanations for them. Now science has filled in some of the realm – not all – that religion used to fill. But the mystery and the beauty of the world is overwhelmingly amazing, and there's no scientific explanation of how it came about. To say that it was generated by random numbers, that does seem, you know, sort of an uncharitable view . I think it makes sense to believe in God, but exactly what decision in your life you make differently because of it, I don't know."
The Codex Leicester is one of Gates' private acquisitions. He purchased the collection of famous scientific writings by Leonardo da Vinci for $30.8 million at an auction in 1994. Gates is also known for being an avid reader, and the ceiling of his large home library is engraved with a quotation from The Great Gatsby. He also enjoys playing bridge, tennis, and golf.
In 1999, his wealth briefly surpassed $101 billion. Despite his wealth and extensive business travel, Gates usually flew coach in commercial aircraft until 1997, when he bought a private jet. Since 2000, the nominal value of his Microsoft holdings has declined due to a fall in Microsoft's stock price after the dot-com bubble burst and the multibillion-dollar donations he has made to his charitable foundations. In a May 2006 interview, Gates commented that he wished that he were not the richest man in the world because he disliked the attention it brought. In March 2010, Gates was the second wealthiest person behind Carlos Slim, but regained the top position in 2013, according to the Bloomberg Billionaires List. Carlos Slim retook the position again in June 2014 (but then lost the top position back to Gates). Between 2009 and 2014, his wealth doubled from US$40 billion to more than US$82 billion. Since October 2017, Gates was surpassed by Amazon.com founder Jeff Bezos as the richest person in the world.
Bill Gates has held the top spot on the list of The World's Billionaires for 18 out of the past 23 years.
Gates has several investments outside Microsoft, which in 2006 paid him a salary of $616,667 and $350,000 bonus totalling $966,667. In 1989, he founded Corbis, a digital imaging company. In 2004, he became a director of Berkshire Hathaway, the investment company headed by long-time friend Warren Buffett. In 2016, he was discussing his gaming habits when he revealed that he was color-blind.
In a BBC interview, Gates claimed "I've paid more tax than any individual ever, and gladly so... I've paid over $6 billion in taxes." He is a proponent of higher taxes, particularly for the rich.