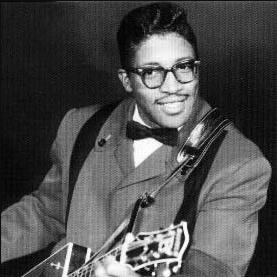 Bo Diddley (December 30, 1928 – June 2, 2008), born Ellas Otha Bates but changed as a child to Ellas McDaniel, was an American R&B and Chicago Blues vocalist and guitarist. In addition, he was a songwriter and music producer, usually as Ellas McDaniel, and had cameo appearances in movies. He was nicknamed The Originator because of his key role in the transition from the blues to rock and roll, and rock, and influenced a host of acts, including Elvis Presley, Buddy Holly, the Beatles, the Rolling Stones, the Yardbirds, Eric Clapton, the Who, the Animals, Pink Floyd, the Velvet Underground, Jimi Hendrix, Parliament Funkadelic, and the Jesus and Mary Chain.