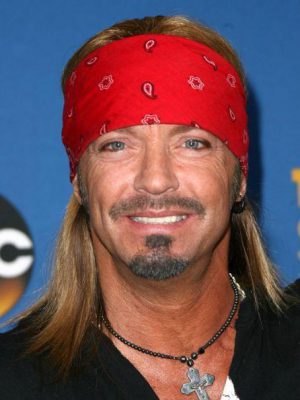 Brett is alive and kicking and is currently 59 years old.
Please ignore rumors and hoaxes.
If you have any unfortunate news that this page should be update with, please let us know using this .

Does Bret Michaels Have the coronavirus?

Bret Michael Sychak, professionally known as Bret Michaels, is an American singer-songwriter and musician. He gained fame as the lead singer of the glam metal band Poison who have sold over 50 million records worldwide and 15 million records in the United States alone. The band has also charted ten singles to the Top 40 of the Billboard Hot 100, including six Top 10 singles and a number-one single, "Every Rose Has Its Thorn".
Michaels began playing the guitar as a teenager, forming a band with drummer Rikki Rockett, bass player Bobby Dall and guitarist David Besselman. Shortly thereafter, Besselman left the band due to creative differences and in 1983 the band hired Matt Smith to form a new band named Paris in Mechanicsburg, Pennsylvania. In early 1984 the band tired of playing the Pennsylvania bar circuit, changed their name to Poison and moved west to Los Angeles to seek fame in the Sunset Boulevard scene. That same year, Michaels met 16-year-old Tracy Lewis, who would become both his girlfriend and the muse for one of his most memorable songs. Eventually, Matt Smith tired of the band's struggle to find fame and returned home. He was replaced by C.C. DeVille, who would become both Michaels' friend and a source of conflict.

Bret is married to long-time love Kristi Gibson. Kristi is the mother of his two daughters Raine Elizabeth (b. May 20, 2000) and Jorja Bleu (b. May 5, 2005) Michaels has a line of pet clothing and accessories called Pets Rock, sold at PetSmart.
Michaels was involved with Pamela Anderson. After Poison's and Michaels's longtime attorney, Ed McPherson obtained a federal injunction prohibiting the distribution of an explicit sex tape that the couple had made, an abridged version of the sex tape appeared on the Internet in 1998 and was released on DVD on September 7, 2005, by Metro Studios.
On May 20, 2010, it was reported on his official website that Michaels has been "readmitted to the hospital this week after suffering numbness on the left side of his body". While conducting diagnostic tests it was found that Michaels has a "patent foramen ovale (PFO), a hole in the heart". It was further reported that his condition is "operable and treatable" and his doctors believe they "have diagnosed the problem that caused the transient ischemic attack (TIA) or warning stroke", but that they "feel it is highly unlikely this is connected to the brain hemorrhage he suffered just a few weeks earlier". On October 11, 2011, Michaels commented on his 2010 health scare with the following: "2010 was, without question, a roller coaster year for me. But when you have an amazing family, and you still have a lot of music left to make, and you have such incredible and supportive fans behind you, you’re going to fight until the very last breath before you throw in that towel."