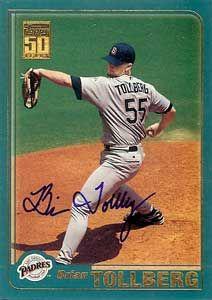 Brian is alive and kicking and is currently 50 years old.
Please ignore rumors and hoaxes.
If you have any unfortunate news that this page should be update with, please let us know using this .

Brian Patrick Tollberg (born September 16, 1972 in Tampa, Florida) is a retired Major League Baseball player who played pitcher from 2000–2003. He played for the San Diego Padres.