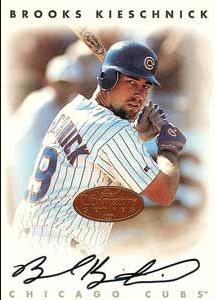 Michael is alive and kicking and is currently 50 years old.
Please ignore rumors and hoaxes.
If you have any unfortunate news that this page should be update with, please let us know using this .

Michael Brooks Kieschnick (born June 6, 1972) is a former American baseball utility player and pitcher who played six seasons in Major League Baseball (MLB). He played the majority of his career for the Chicago Cubs and the Milwaukee Brewers, and also played for the Cincinnati Reds and Colorado Rockies from 1996 to 2004. He batted left-handed but threw right-handed. During the initial part of his major league career, he was exclusively a position player, playing the outfield; for his final two seasons in the big leagues, he served primarily as a relief pitcher who also occasionally doubled as an outfielder and pinch hitter.