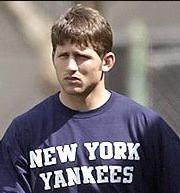 Richard is alive and kicking and is currently 46 years old.
Please ignore rumors and hoaxes.
If you have any unfortunate news that this page should be update with, please let us know using this .

Richard Stephen "Bubba" Crosby (born August 11, 1976) is a former Major League Baseball outfielder who played with the Los Angeles Dodgers and the New York Yankees. He is best known for his tenure as a backup outfielder for the Yankees, when his defense and running games were often put to use and he played a prominent starting role near the end of the 2005 season.