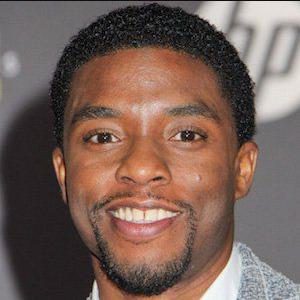 Chadwick passed away on August 28, 2020 at the age of 43 in Los Angeles, California, USA. Chadwick's cause of death was cancer.

Chadwick Aaron Boseman is an American actor, screenwriter, and playwright. He is best known for portraying Jackie Robinson in 42 and James Brown in Get on Up (2014). He also had roles in the television series Lincoln Heights (2008) and Persons Unknown (2010), and the films The Express (2008) and Draft Day (2014). He is set to play Black Panther in the films Captain America: Civil War, scheduled for release in 2016, and Black Panther, scheduled for 2018.
Boseman wanted to write and direct, and initially began studying acting to learn how to relate to actors. After he returned to the US, he graduated from New York City's Digital Film Academy. He lived in Brooklyn at the start of his career. Boseman worked as the drama instructor in the Schomburg Junior Scholars Program, housed at the Schomburg Center for Research in Black Culture in Harlem, New York. In 2008 he moved to Los Angeles to pursue an acting career.

Boseman was raised a Christian. He was baptized, and was part of a church choir and youth group. His former pastor said that he still keeps his faith. Boseman has stated that he prayed to be the Black Panther before he was cast as the character in the Marvel Cinematic Universe.
Boseman was diagnosed with stage III colon cancer in 2016, which eventually progressed to stage IV before 2020. He had never spoken publicly about his cancer diagnosis. During treatment, involving multiple surgeries and chemotherapy, he continued to work and completed production for several films, including Marshall, Da 5 Bloods, Ma Rainey's Black Bottom, and others. Boseman died at his home as a result of complications related to colon cancer on August 28, 2020, with his wife and family by his side.