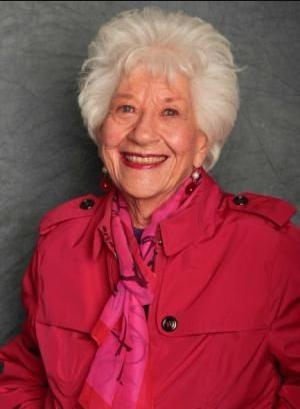 Charlotte passed away on August 5, 2018 at the age of 92 in Los Angeles, California, United States.

Charlotte Rae was born Charlotte Rae Lubotsky in 1926, in Milwaukee, Wisconsin, where she was raised on a farm, the middle of two sisters, Beverly and Mimi. Her parents, Esther (Ottenstein) and Meyer Lubotsky, were Russian Jewish immigrants. Rae wanted to be a dramatic actress, but eventually wound up being a comedienne, all because of her stand-up comedy routines. After graduating from high school, she attended Northwestern University, where she met the unfamiliar actress Cloris Leachman, and would be best friends for life.
Rae joined Alcoholics Anonymous in the early 1970s. The organization became an important part of her personal life. She maintained her nearly fifty-year sobriety until her death.

In 1982, Rae had a pacemaker implanted in her chest. With periodic alterations, the same pacemaker worked over 30 years, but it stopped abruptly several years before Rae's death. Her heart rate was around 35 beats per minute prior to entering emergency surgery to install a new pacemaker. The old pacemaker was left in place on the left side of her chest and the new, smaller pacemaker was placed on the right side. It functioned well until her death. In addition to pacemaker replacement, Rae had open heart surgery to replace her mitral valve with a mechanical equivalent. Her left carotid artery was cleared of blockage as well.
In 2009, due to the frequency of pancreatic cancer in her own family, Rae was screened, diagnosed early, and became cancer-free after six months of chemotherapy. Her mother, an uncle, and her elder sister Beverly all reportedly died from pancreatic cancer. In 2017, aged 91, she was, however, diagnosed with bone cancer.