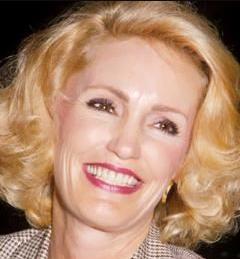 Cheryl is alive and kicking and is currently 78 years old.
Please ignore rumors and hoaxes.
If you have any unfortunate news that this page should be update with, please let us know using this .

Does Cheryl Crane Have the coronavirus?

Cheryl Crane's father, Stephen Crane, died on February 6, 1985 as he was 68 years old. His cause of death was anemia.

Cheryl Crane's mother, Lana Turner, died on June 29, 1995 as she was 74 years old. Her cause of death was throat cancer.

Cheryl Christina Crane is the only child of actress Lana Turner, from her marriage to actor-restaurateur Stephen Crane, her second husband.
In the years following Stompanato's death, Crane's rebellious behavior was well-documented in the press. Upon graduating from high school, she briefly worked as a model before entering the restaurant business, working at the Luau, a Polynesian restaurant owned by her father. She would later study restaurant management and hospitality at Cornell University, hoping to become a restaurateur.

On April 4, 1958, at age 14, Crane stabbed her mother's boyfriend, Johnny Stompanato, to death. The killing was ruled a justifiable homicide: she was deemed to have been protecting her mother. Stompanato was well-known to have been abusive, extremely jealous of Turner and had previously pointed a gun at actor Sean Connery, her co-star in Another Time, Another Place, only to have Connery "take the gun from him, beat him and force him from the movie set" and "Scotland Yard had him deported."
Following Stompanato's death, Crane was made a ward of the State of California and was placed in the El Retiro School for Girls in Sylmar, Los Angeles for "psychiatric therapy" in March 1960. Six weeks later she and two other girls climbed a 10-foot wall and fled. They were eventually returned to the school after she telephoned her father. Five weeks later, she again fled the campus with two other girls. They walked into Sylmar and were driven by a new acquaintance to Beverly Hills, where they were taken into custody a few hours later after being seen near her grandmother's home. She was released from the school in January 1961 to the custody of her mother and stepfather, Frederick D. May. Worried she was still suffering from the trauma of Stompanato's death, Turner sent Crane to the Institute of Living in Hartford, Connecticut.
In November 2014, Crane married LeRoy, her longtime partner, after having been together for over four decades.