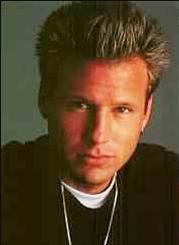 Corey is alive and kicking and is currently 59 years old.
Please ignore rumors and hoaxes.
If you have any unfortunate news that this page should be update with, please let us know using this .

Does Corey Hart Have the coronavirus?

Corey Mitchell Hart is a Canadian singer, best known for his hit singles "Sunglasses at Night" and "Never Surrender". He has sold over 16 million records worldwide and scored nine US Billboard Top 40 hits. In Canada Hart has amassed 30 Top 40 hits, including 11 in the Top 10, over the course of 30 years in the music industry. Nominated for the Grammy Award for Best New Artist in 1984, Hart is also a multiple Juno award nominee and winner in Canada. He has also been honoured by the American Society of Composers, Authors and Publishers and the Society of Composers, Authors and Music Publishers of Canada (SOCAN).
Hart was born on May 31, 1962, in Montreal, Quebec, the youngest of five children of Mina (Weber) and Robert Hart, both Montreal natives. His paternal grandfather was a Ukrainian Jewish immigrant, while Corey's mother was from a Romanian Jewish family. Hart's parents separated when he was 10 years old. Hart then returned to Montreal to live with his mother and older brother Robbie. He shared an especially close relationship with his mother, to whom Hart's first album was dedicated. Hart's lack of contact and intimacy with his father pained him throughout his life and coloured many of his compositions, such as the 1998 song "Reconcile."

Hart was briefly considered for the role of Marty McFly in the 1985 film Back to the Future. Producer Steven Spielberg sent Hart a copy of the script with an invitation for a screen test – a flattered Hart declined, preferring to focus on music instead of acting. Fellow Canadian Michael J. Fox eventually starred in the hit film.
In 2002, "Sunglasses at Night" was featured in the award-winning video game Grand Theft Auto: Vice City. The game went on to sell over 17.5 million units, making it the second highest selling video game ever made for Sony PlayStation 2. The song title is also an important clue to the mystery in Lior Samson's debut novel, Bashert.