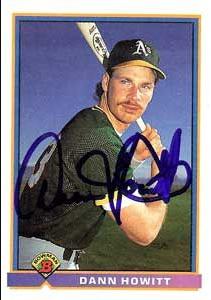 Dann is alive and kicking and is currently 58 years old.
Please ignore rumors and hoaxes.
If you have any unfortunate news that this page should be update with, please let us know using this .

Dann Paul John Howitt (born February 13, 1964 in Battle Creek, Michigan) is a retired Major League Baseball outfielder. He played college baseball at Cal State Fullerton, graduating in 1986 and was drafted by the Oakland Athletics in the 18th round of the 1986 amateur draft. He played during six seasons at the major league level for the Athletics, Seattle Mariners, Chicago White Sox. Howitt played his first professional season with their Class A (Short Season) Medford A's in 1986, and his last with the Colorado Rockies' Triple-A Colorado Springs Sky Sox in 1997.