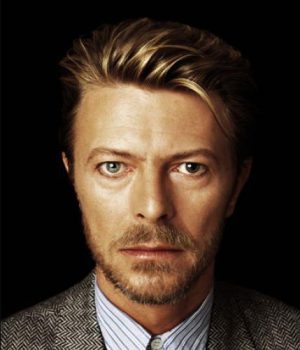 Bowie married his first wife, Mary Angela Barnett on 19 March 1970 at Bromley Register Office in Bromley, London. Their son Duncan, born on 30 May 1971, was at first known as Zowie. Bowie and Angela divorced on 8 February 1980 in Switzerland.
On 24 April 1992, Bowie married Somali-American model Iman in a private ceremony in Lausanne. The wedding was later solemnised on 6 June in Florence. They had one daughter, Alexandria "Lexi" Zahra Jones, born in August 2000. The couple resided primarily in New York City and London, as well as owning an apartment in Sydney's Elizabeth Bay. and Britannia Bay House on the island of Mustique, now renamed Mandalay Estate.
Bowie declared himself gay in an interview with Michael Watts for a 1972 issue of Melody Maker, coinciding with his campaign for stardom as Ziggy Stardust. According to Buckley, "If Ziggy confused both his creator and his audience, a big part of that confusion centred on the topic of sexuality". In a September 1976 interview with Playboy, Bowie said, "It's true—I am a bisexual. But I can't deny that I've used that fact very well. I suppose it's the best thing that ever happened to me". According to his first wife, Angie, Bowie had a relationship with Mick Jagger.
In a 1983 interview with Rolling Stone, Bowie said his public declaration of bisexuality was "the biggest mistake I ever made" and "I was always a closet heterosexual". On other occasions, he said his interest in homosexual and bisexual culture had been more a product of the times and the situation in which he found himself than of his own feelings.
Blender asked Bowie in 2002 whether he still believed his public declaration was his biggest mistake. After a long pause, he said, "I don't think it was a mistake in Europe, but it was a lot tougher in America. I had no problem with people knowing I was bisexual. But I had no inclination to hold any banners nor be a representative of any group of people." Bowie said he wanted to be a songwriter and performer rather than a headline for his bisexuality, and in "puritanical" America, "I think it stood in the way of so much I wanted to do".
Buckley wrote that Bowie "mined sexual intrigue for its ability to shock", and was probably "never gay, nor even consistently actively bisexual", instead experimenting "out of a sense of curiosity and a genuine allegiance with the 'transgressional'". Biographer Christopher Sandford said, according to Mary Finnigan—with whom Bowie had an affair in 1969—the singer and his first wife Angie "created their bisexual fantasy". Sandford wrote that Bowie "made a positive fetish of repeating the quip that he and his wife had met while 'fucking the same bloke' ... Gay sex was always an anecdotal and laughing matter. That Bowie's actual tastes swung the other way is clear from even a partial tally of his affairs with women". The BBC's Mark Easton wrote in 2016 that Britain was "far more tolerant of difference" and that gay rights, such as same-sex marriage, and gender equality would not have "enjoyed the broad support they do today without Bowie's androgynous challenge all those years ago".
On 10 January 2016, two days after his 69th birthday and the release of the album Blackstar, Bowie died from liver cancer in his New York City apartment. He had been diagnosed 18 months earlier but had not made the news of his illness public. The Belgian theatre director Ivo van Hove, who had worked with the singer on his Off-Broadway musical Lazarus, explained that Bowie was unable to attend rehearsals due to the progression of the disease. He noted that Bowie had kept working during the illness.
Bowie's producer Tony Visconti wrote:
"He always did what he wanted to do. And he wanted to do it his way and he wanted to do it the best way. His death was no different from his life – a work of art. He made Blackstar for us, his parting gift. I knew for a year this was the way it would be. I wasn't, however, prepared for it. He was an extraordinary man, full of love and life. He will always be with us. For now, it is appropriate to cry."
Following Bowie's death, fans gathered at impromptu street shrines. At the mural of Bowie in his birthplace of Brixton, south London, which shows him in his Aladdin Sane character, fans laid flowers and sang his songs. Other memorial sites included Berlin, Los Angeles, and outside his apartment in New York. After news of his death, sales of his albums and singles soared. Bowie had insisted that he did not want a funeral, and according to his death certificate he was cremated in New Jersey on 12 January.