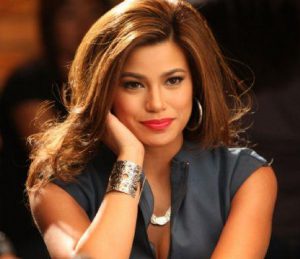 Denise Maria is alive and kicking and is currently 34 years old.
Please ignore rumors and hoaxes.
If you have any unfortunate news that this page should be update with, please let us know using this .

Does Denise Laurel Have the coronavirus?

Denise Maria Sanz Laurel, better known as Denise Laurel, is a Filipina actress and singer. She is best known for playing roles in various ABS-CBN dramas, such as Precious Hearts Romances series' Midnight Phantom and Kristine, Dahil Sa Pag-ibig, Annaliza and most recently Nasaan Ka Nang Kailangan Kita. She is also the Grand Winner of the second season of the Philippine edition of Your Face Sounds Familiar. Laurel is currently a member of Star Magic.
In 2013, Laurel played an antagonist role in the last PHR series Paraiso, and later became part of the pre-primetime family drama series Annaliza that was aired until March 2014 who portrays Isabel. She starred in the afternoon melodrama series Nasaan Ka Nang Kailangan Kita in 2015. The said series was set to replace Faith in the first quarter of the year on primetime, but it instead was an afternoon program. On the same year after NKNKK, Laurel auditioned to an ABS-CBN show Your Face Sounds Familiar (Philippines season 2) which was titled as the second YFSF KaFace/Grand Winner.

She is the granddaughter of former Vice President, the late Salvador Laurel and her grandmother Celia Diaz, and the great-granddaughter of former Philippine President, the late Jose P. Laurel. She is the youngest daughter of David Laurel. She has a son named Alejandro born in 2011.
She became engaged to professional basketball player Sol Mercado in March 2014. However, on 20 October 2016, Laurel announced through her Instagram account that they have ended their relationship.