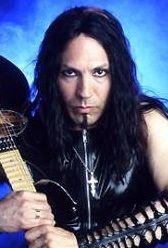 Doug is alive and kicking and is currently 59 years old.
Please ignore rumors and hoaxes.
If you have any unfortunate news that this page should be update with, please let us know using this .

Doug Blair, born February 11, 1963 as Douglas Blair Lucek, is a heavy metal guitarist and member of W.A.S.P.. Doug's early development as a musician took place in his home state of Connecticut (USA). His focus on technical ability with the guitar quickly saw him gaining a reputation locally with his early band, Run 21. This band played small club dates in the Tri-State area (NY,NJ,CT) and recorded some original material during that time. One of the songs, "Baby It's Your Face" was recorded at Presence Studios in Weston, Connecticut and released on the Metalstorm compilation produced by Jamie Bircumshaw and Tom Boyd in 1985. This early Doug Blair band, Run 21 also included Stet Howland on drums who would later join W.A.S.P. ( as would Blair). Run 21 was especially known for its outlandish show (compared to other Connecticut acts) that would see Blair jumping up on the bar and playing while running in between glasses and bottles. The act had an element of comedy with drummer Stet Howland's dialogue with the audience. This early "over the top" style of performance were precursors to what Blair and Howland would be doing with the internationally known W.A.S.P.