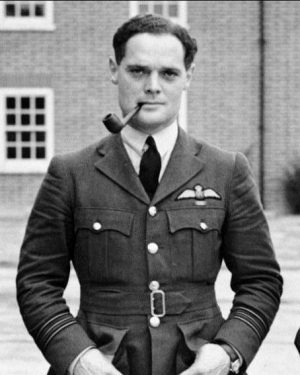 Douglas passed away on September 5, 1982 at the age of 72 in Chiswick, London, UK. Douglas's cause of death was heart attack.

Group Captain Sir Douglas Robert Steuart Bader /ˈbɑːdər/ CBE, DSO & Bar, DFC & Bar, FRAeS, DL (21 February 1910 – 5 September 1982) was a Royal Air Force (RAF) flying ace during the Second World War. He was credited with 22 aerial victories, four shared victories, six probables, one shared probable and 11 enemy aircraft damaged.
In August 1941, Bader baled out over German-occupied France and was captured. Soon afterward, he met and was befriended by Adolf Galland, a prominent German fighter ace. Despite his disability, Bader made a number of escape attempts and was eventually sent to the prisoner of war camp at Colditz Castle. He remained there until April 1945 when the camp was liberated by the First United States Army.

Bader's first wife, Thelma, developed throat cancer in 1967. Aware that her survival was unlikely, the two spent as much time with each other as possible. Thelma was a smoker, and although she stopped smoking, it did not save her. After a long battle, she died on 24 January 1971. Bader married Joan Murray (née Hipkiss) on 3 January 1973. They spent the remainder of their lives in the village of Marlston, Berkshire. Joan was the daughter of a steel tycoon. She had an interest in riding and was a member of the British Limbless Ex-Serviceman's Association. They first met at one of the association's events in 1960. She also helped associations involved in riding for the disabled. Bader campaigned vigorously for people with disabilities and set an example of how to overcome a disability. In June 1976, Bader was knighted for his services to disabled people. Actor John Mills and Air Vice-Marshal Neil Cameron attended the ceremony.