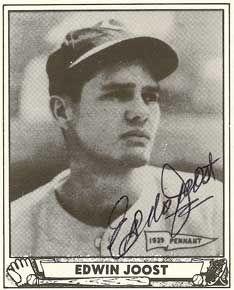 Edwin David Joost (June 5, 1916 – April 12, 2011) was a shortstop and manager in American Major League Baseball. In 1954, Joost became the third and last manager in the 54-year history of the Philadelphia Athletics. Under Joost, the A's finished last in the American League and lost over 100 games. After that season, they relocated to Kansas City.