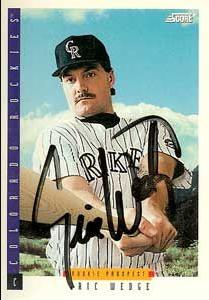 Eric is alive and kicking and is currently 53 years old.
Please ignore rumors and hoaxes.
If you have any unfortunate news that this page should be update with, please let us know using this .

Does Eric Wedge Have the coronavirus?

Eric Michael Wedge (born January 27, 1968) is a Major League Baseball manager and former catcher, who most recently managed the Seattle Mariners. As a player, Wedge attended Northrop High School in Fort Wayne and played on the school's state champion baseball team in 1983. He went on to attend Wichita State University, and played on the Shockers team that won the 1989 College World Series. From 1989–1997 he played in the minor league systems of the Boston Red Sox, Colorado Rockies, Detroit Tigers, and Philadelphia Phillies, and played in 39 major league games with the Red Sox and Rockies between 1991 and 1994. Wedge went on to manage in the Cleveland Indians minor league system from 1998–2002 before being named manager of the Indians for the 2003 season. He led the Indians to a postseason berth in 2007, and won the American League Manager of the Year Award that year. He managed the Indians through the 2009 season, and was hired by the Mariners for the 2011 season.