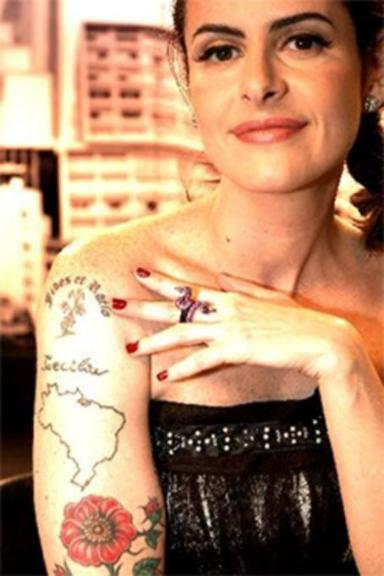 Maria Fernanda Young Carvalho Machado was a writer, scriptwriter, presenter and actress Brazilian.
In 1995 , she was a screenwriter for the television program A Comedy of Private Life, by Rede Globo. The following year, Fernanda released her first novel, Shame of the Feet, which already has more than 15 issues. The following year, she launched In the Shadow of Your Wings, which tells the story of love, obsession and revenge between photographer Rigel (who reappears in the book Arithmetic ) and aspiring top model Catarina, who had the rights bought by a Hollywood producer interested in making a history movie.

In 1990, she started a relationship with the writer and writer Alexandre Machado. Both married in 1993. Together they had twins Cecilia Madonna and Estela May, born on March 19 , 2000, via Caesarean section in Rio de Janeiro. In 2007, again pregnant with a girl, she had a miscarriage at four months of gestation. Very emotionally shaken by the episode, she decided, in agreement with her husband, to enter the adoption line, in parallel with a fertilization treatment, but which was unsuccessful. In 2010 was able to adopt her two children: Catarina Lakshimi, born November 10, 2008, and John Gopala, born July 21 , 2009.
Fernanda had had asthma since her childhood, always receiving treatment, but due to an intense and sudden asthmatic crisis, she died on August 25, 2019, at 49 years old. The artist was staying at her family's place in Gonçalves, Minas Gerais, where she always went to visit them and rest in the midst of nature. After being sick and passing out in her room, she was called the ambulance, which took her to the nearest hospital, located in the city of Paraisópolis, and died of a respiratory arrest, which caused a cardiac arrest during the night, just over a hour after your ICU stay. The writer was buried in Congonhas Cemetery, in the South Zone of São Paulo, city where she lived for fifteen years.