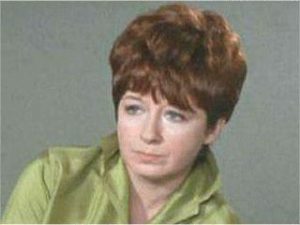 Frances is alive and kicking and is currently 85 years old.
Please ignore rumors and hoaxes.
If you have any unfortunate news that this page should be update with, please let us know using this .

Does Frances Cuka Have the coronavirus?

Frances Cuka is a British actress, principally on television, whose career has spanned over fifty years.
Cuka (pronounced Chewka) was born in London, England, the daughter of Letitia Alice Annie (née Francis), a tailor, and Joseph Cuka, a process engraver. The family subsequently moved to Hove. As a child, she appeared in BBC radio broadcasts as part of Children's Hour. She trained at the Guildhall School of Music and Drama.

Cuka then moved into television. Her subsequent television roles included Adam Adamant Lives, Hammer House of Horror (the episode "Charlie Boy"), The Champions and Minder. She also appeared as Doll Tearsheet in a BBC TV version of Henry IV, Part II. She had recurring roles in the soap operas Crossroads and Coronation Street. Her film roles have included Scrooge (1970) as Bob Cratchit's wife, and Henry VIII and his Six Wives (1972) as Catherine of Aragon.
Cuka was the second actress to play Peggy Mitchell in the BBC1 soap opera EastEnders when the character was first introduced in 1991. She had filmed several scenes of the character when she was axed from the show and all her scenes were scrapped; Jo Warne was then cast in the role.