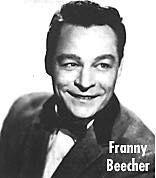 Franny passed away on February 24, 2014 at the age of 92 in Philadelphia, PA. Franny's cause of death was natural causes.

Francis "Franny" Beecher (September 29, 1921 – February 24, 2014), also known as Frank Beecher, was the lead guitarist for Bill Haley & His Comets from 1954 to 1962, and is best remembered for his innovative guitar solos combining elements of country music and jazz. He composed the classics "Blue Comet Blues", "Goofin' Around", "Week End", and "Shaky" when he was the lead guitarist for Bill Haley and the Comets. He continued to perform with surviving members of the Comets into 2006. In 2012, the Rock and Roll Hall of Fame inducted Beecher as a member of the Comets by a special committee, aimed at correcting the previous mistake of not inducting the Comets with Bill Haley.