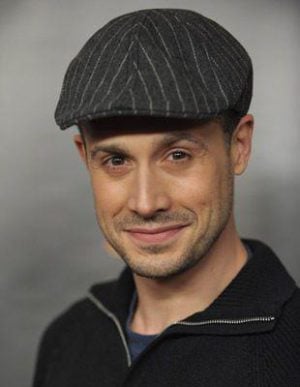 Freddie is alive and kicking and is currently 46 years old.
Please ignore rumors and hoaxes.
If you have any unfortunate news that this page should be update with, please let us know using this .

Does Freddie Prinze Jr. Have the coronavirus?

Freddie Prinze Jr.'s father, Freddie Prinze, died on January 29, 1977 as he was 22 years old. His cause of death was suicide by gunshot.

Freddie James Prinze Jr. is an American actor. He starred in several films, such as I Know What You Did Last Summer, I Still Know What You Did Last Summer (1998), She's All That (1999), Scooby-Doo (2002), and its sequel Scooby-Doo 2: Monsters Unleashed (2004).
Prinze has also had recurring and starring roles in television shows, including Friends (2002), Boston Legal (2004), Freddie (2005-06), but the best known of which is his role as Cole Ortiz on the main cast of the FOX hit espionage thriller [] (2010). He is currently the voice of Kanan Jarrus in the Disney XD series Star Wars Rebels.

He is the husband of Sarah Michelle Gellar and worked for WWE as a producer and director.
Prinze was cast in a guest role on the ABC TV series Family Matters in 1995. He then appeared in a few programs and made-for-TV movies, before making his motion picture debut in To Gillian on Her 37th Birthday in 1996. In subsequent years, Prinze experienced success with appearances in youth-oriented movies. I Know What You Did Last Summer and its sequel, I Still Know What You Did Last Summer (1998), made him well-known among teenage audiences. In his first leading role, the romantic comedy She's All That (1999), he was very successful at the box office. The film grossed $63 million in the United States.
In 2002, he played Fred Jones in the live-action film version of the popular cartoon, Scooby-Doo, and reprised the role in the 2004 sequel, Scooby-Doo 2: Monsters Unleashed, both alongside his wife Sarah Michelle Gellar. He guest starred on the popular NBC show, Friends, as a sensitive male nanny named Sandy on the series' 200th episode. He also appeared as Donny Crane, a character believed to be Denny Crane's son in the ABC legal drama-comedy Boston Legal. Prinze starred in his own television sitcom, titled Freddie. The sitcom is said to depict some actual events from his life, and lasted one season before being canceled in May 2006. He guest starred on George Lopez for a crossover with Freddie. In 2004, Prinze accepted a special award from TV Land on behalf of his late father. He thanked his father's former co-star, Della Reese, for her continued advice and support. In 2006, he lent his voice to the character of Pi in the computer-animated film Shark Bait. Also in 2007, he lent his voice to the character of Rick in Happily N'Ever After along with his wife Gellar, Wallace Shawn, Andy Dick, George Carlin, and Sigourney Weaver. In 2008, he auditioned for Jigsaw in Punisher: War Zone, but was not given the part at the decision of Lionsgate Studios. He later voice titular character in animation movie Delgo. In 2010, Prinze guest starred on Psych as Dennis, a grade school friend of Shawn Spencer and Burton Guster.He also voiced Tim and Jim Possible in the Kim Possible movie Kim Possible: A Sitch in Time.
On August 17, Prinze appeared on Raw as a special guest host, where he was assaulted by then WWE Champion Randy Orton after refusing to bail Orton out of his tag team match with John Cena, who was due to challenge him in the upcoming SummerSlam. Prinze later returned to the program and got his payback during Orton's match with Cena against Big Show and Chris Jericho, by setting up a lumberjack match involving Mark Henry, Primo, Evan Bourne, Kofi Kingston, MVP and Jamie Noble.
Prinze married actress Sarah Michelle Gellar on September 1, 2002, in Puerto Vallarta, Jalisco, in western Mexico. The couple met several years before, while filming I Know What You Did Last Summer, started dating in 2000 and were engaged in April 2001. They also co-starred in Scooby Doo (2002), and Scooby-Doo 2: Monsters Unleashed (2004). Gellar and Prinze have two children together.