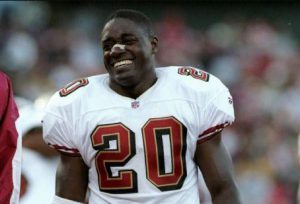 Garrison is alive and kicking and is currently 51 years old.
Please ignore rumors and hoaxes.
If you have any unfortunate news that this page should be update with, please let us know using this .

Gerard Garrison Hearst (born January 4, 1971) is a former running back in the National Football League (NFL) for ten seasons. He played college football for the University of Georgia, and was recognized as an All-American. A first-round pick by the Phoenix Cardinals, he also played professionally for the Cincinnati Bengals, San Francisco 49ers and Denver Broncos of the NFL. He ran for 1,000 yards or more in four different seasons. He was named the NFL Comeback Player of the Year Award in 2001.