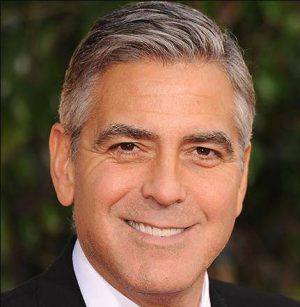 George is alive and kicking and is currently 61 years old.
Please ignore rumors and hoaxes.
If you have any unfortunate news that this page should be update with, please let us know using this .

Does George Clooney Have the coronavirus?

George Clooney's father, Nick Clooney, is still alive and kicking at the age of 88. He is American and has had a career as a actor.

George Timothy Clooney was born on May 6, 1961, in Lexington, Kentucky, to Nina Bruce (née Warren), a former beauty pageant queen, and Nick Clooney, a former anchorman and television host (who was also the brother of singer Rosemary Clooney). He has Irish, English, and German ancestry. Clooney spent most of this youth in Ohio and Kentucky, and graduated from Augusta High School. He was very active in sports such as basketball and baseball, and tried out for the Cincinnati Reds, but was not offered a contract.
Clooney married actress Talia Balsam in 1989; they divorced in 1993.

Clooney became engaged to British-Lebanese human rights lawyer Amal Alamuddin on April 28, 2014. In July 2014, Clooney publicly criticized the British tabloid newspaper the Daily Mail after it claimed his fiancée's mother opposes their marriage on religious grounds. When the tabloid apologized for its false story, Clooney refused to accept the apology. He called the paper "the worst kind of tabloid. One that makes up its facts to the detriment of its readers." On August 7, 2014, Clooney and Alamuddin obtained marriage licenses at the Royal Borough of Kensington and Chelsea of the United Kingdom. Alamuddin and Clooney were officially married on September 27, 2014, at Ca' Farsetti. They were married by Clooney's friend Walter Veltroni, the former mayor of Rome. In 2015, Clooney and Alamuddin adopted a rescue dog, a bassett hound named Millie, from the San Gabriel Valley Humane Society. On February 9, 2017, it was reported by the CBS talk show, The Talk, that Amal was pregnant, and that they were expecting twins. On June 6, 2017, Amal gave birth to a daughter, Ella, and a son, Alexander.
On September 21, 2007, Clooney and then-girlfriend Sarah Larson were injured in a motorcycle accident in Weehawken, New Jersey, when his motorcycle was hit by a car. The driver of the car reported that Clooney attempted to pass him on the right, while Clooney said that the driver signaled left and then decided to make an abrupt right turn and clipped his motorcycle. On October 9, 2007, more than two dozen staff at Palisades Medical Center were suspended without pay for looking at Clooney's medical records in violation of federal law.