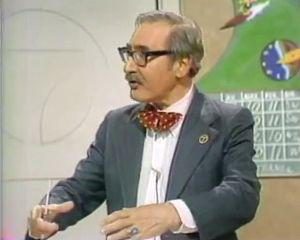 George Richard Fischbeck,, better known as Dr. George Fischbeck, was an American television weatherman on KOB-TV in Albuquerque, New Mexico from the early 1960s to early 1970s. In 1972 he moved to KABC-TV in Los Angeles, replacing Alan Sloane, where he became a staple on the station's Eyewitness News broadcasts. He would retire from KABC-TV in 1990, but returned to television with a brief stint at KCBS-TV from 1994 to 1997.