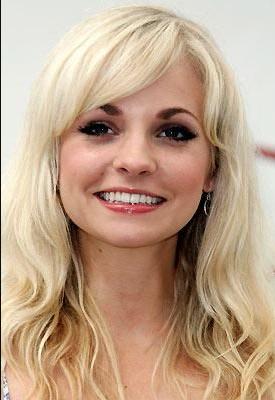 Georgia is alive and kicking and is currently 37 years old.
Please ignore rumors and hoaxes.
If you have any unfortunate news that this page should be update with, please let us know using this .

Does Georgia Moffett Have the coronavirus?

Georgia Moffett's father, Peter Davison, is still alive and kicking at the age of 71. He is English and has had a career as a actor.

Georgia Moffett's mother, Sandra Dickinson, is still alive and kicking at the age of 73. She is American and has had a career as a actress.

Georgia Elizabeth Moffett is an actress. She is the daughter of actors Peter Davison and Sandra Dickinson.Moffett was raised in Oxford, where she attended a private school. She fell pregnant at age 16, and left school, giving birth to her son Ty shortly after she turned 17. She lived with her mother for a few years, her parents supporting her and helping raise her son. Her mother stopped work and became the child's primary care-giver so that Moffett "could enjoy a normal teenage social life", and her father supported her financially and later paid for her to have a live-in nanny.In 2004, she started a relationship with actor Adam Paul Harvey, moving in with him a few months later. He quickly became joint care-giver to her son, to the point they considered him Ty's father "in every way except genetically." The relationship ended in 2006, but Harvey kept informal joint custody of Ty and still has a close relationship with him. A live-in nanny, Alice, moved in the day after he moved out.In November 2007 she met actor David Tennant when she played his daughter, and started spending time together due to his friendship with and admiration for her father Peter Davison, one of his childhood icons. Despite Moffett's self-confessed immediate romantic interest in him, he did not pursue her, and continued to date other women. In summer 2008 they became romantically involved and dated (mainly long-distance) for two years. In summer 2010 Moffett discovered she was pregnant. They moved in together and got engaged in December 2010. Their daughter Olive was born three months later, and they married the following December in a secret registry office ceremony. The day after they had a lavish joint reception and New Year's Eve party at the Swan restaurant next to the Globe Theatre. Moffett had Ty's surname changed to his new stepfather's stage name by deed poll and Tennant later adopted the boy. Seven months after their wedding Moffett fell pregnant again, and gave birth to her third child Wilfred on 2 May 2013. Tennant and Moffett separated temporarily for several months in 2013/2014, reportedly due to Tennant living away from home for most of the year for work. Moffett became pregnant again in late 2014. Ty is an aspiring child actor who attends stage school, and both he and the infant Olive have made acting/TV appearances. Moffett and Ty appeared together in a reality TV show in 2008.Moffett began acting when she was a teenager and has often performed alongside her father, and in various Doctor Who-related media. In the early years of her career she appeared in various TV shows, including The Bill, Peak Practice, Where the Heart Is, Bonkers, and Like Father Like Son. She gained wide exposure in 2008, when she guest-starred in an episode of Doctor Who playing Jenny, the Doctor's clone daughter. This led to much media coverage, as Moffett is in real life 'the Doctor's daughter' (as her father played the Fifth Doctor), and even more media coverage when it was revealed she was dating David Tennant, who had played her father in the episode.After her Doctor Who appearance Moffett acted in the BBC Three series Spooks: Code 9 (which was cancelled after a few episodes), played a guest starring role in an episode of Merlin, played a cameo role in the TV drama Thorne, and acted in a short play which was ran for one weekend at the Riverside Studios fringe theatre in west London. She also recorded some Doctor Who audio books. More recently she played Emma in BBC3 sitcom White Van Man, which was cancelled after two series. In 2012 she made her West End debut in the play What the Butler Saw, playing the supporting role of a secretary who the main character tries to seduce, a role that required her to strip on stage. Unfortunately the play was a critical and commercial flop and was cancelled early.In January 2013 her father revealed Georgia had quit acting as she had struggled to find acting work. In 2013 she produced and acted in her father's Doctor Who anniversary webcast (her first producing job), in this she was credited under the name of Tennant for the first time. In 2014 she guest starred in Casualty (making her third guest appearance on the show, playing three different characters) playing the fiancee of a burns victim, and also produced and starred in a short film, which had its public debut as part of a short film festival, screening in a cafe-bar in East London in April 2015. In early 2015 she became pregnant again, giving birth to a daughter in October.