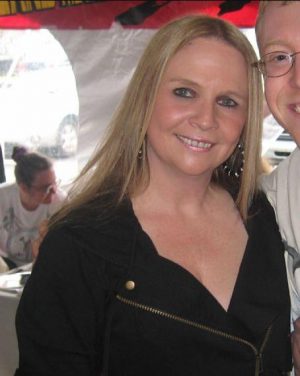 Geri is alive and kicking and is currently 62 years old.
Please ignore rumors and hoaxes.
If you have any unfortunate news that this page should be update with, please let us know using this .

Does Geri Reischl Have the coronavirus?

Child actress Geri Reischl began her career at the Melodyland Theatre in Anaheim, California, where she was discovered by a talent agent. She was immediately cast in a long series of commercials, including an extended contract with Mattel toys. This led to featured roles in the films The Brotherhood of Satan (1971) and I Dismember Mama (1972). Geri's primary talent is singing and, along with her band "Sand Dabs", she performed at Magic Mountain, Knotts Berry Farm, and the famous Palomino Club of North Hollywood during the early 1970s. She was featured along with Sammy Davis Jr. in his Lake Tahoe night club act, toured with Canadian singing sensation René Simard, and performed at the Grand Ol' Opry. Geri Reischl is most famous for replacing Eve Plumb as "Jan Brady" on The Brady Bunch Variety Hour (1976) in a series of nine variety hour specials during the 1976-77 television season. Her tenure as "Fake Jan" has been spoofed on numerous television shows, including The Simpsons (1989), Tiny Toon Adventures (1990) and on segments from TV Land and Nick-at-Nite.Today, Geri Reischl continues her association show business making public appearances on radio, television and autograph shows.