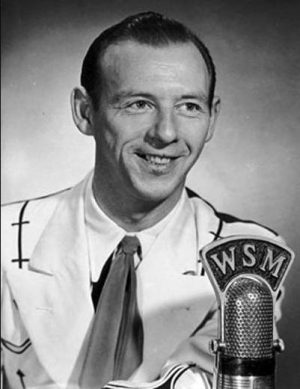 Hank passed away on November 20, 1999 at the age of 85 in Madison, Tennessee, USA. Hank's cause of death was natural causes.

Clarence Eugene "Hank" Snow was a celebrated Canadian country music artist. In a career that spanned nearly 50 years, he recorded 140 albums and charted more than 85 singles on the Billboard country charts from 1950 until 1980. His number one hits include the self-penned songs "I'm Moving On", "The Golden Rocket" and famous versions of "I Don't Hurt Anymore", "Let Me Go, Lover!", "I've Been Everywhere", "Hello Love", as well as other top 10 hits.
After his mother's remarriage to local fisherman Charles Tanner, who as a talented folk carver later went on to become a well-known artist in his own right, she ordered a Hawai'ian steel guitar advertised in a magazine along with free lessons and several 78 rpm gramophone records. At first, she ordered Hank not to touch the guitar because it was one of her prized possessions, but later, when she finally allowed him to play, she marveled at the various sounds that Hank could get from the instrument. After Hank had mastered some chords and a few songs, his mother would ask him to sing and play for her. When he performed for the neighbours, word got around and he was then being invited out somewhere just about every night. So it was through his mother's mail-order guitar that he became interested in music."

A regular at the Grand Ole Opry, in 1954 Snow persuaded the directors to allow a young Elvis Presley to appear on stage. Snow used Presley as his opening act and introduced him to Colonel Tom Parker. In August 1955, Snow and Parker formed the management team, Hank Snow Attractions. This partnership signed a management contract with Presley but before long, Snow was out and Parker had full control over the rock singer's career. Forty years after leaving Parker, Snow stated, "I have worked with several managers over the years and have had respect for them all except one. Tom Parker [Snow refused to recognize the honorary title "Colonel"] was the most egotistical, obnoxious human being I've ever had dealings with."
In 1996, Snow began experiencing respiratory problems which forced him to retire from performing. He died three years later at 12:30am on December 20, 1999, from heart failure at his Rainbow Ranch in Madison, Tennessee, and was interred in the Spring Hill Cemetery in Nashville, Tennessee. Minnie died on May 12, 2003, in Madison, Tennessee.