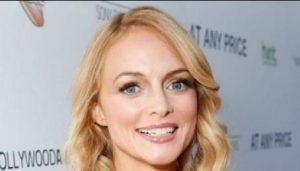 Heather is alive and kicking and is currently 52 years old.
Please ignore rumors and hoaxes.
If you have any unfortunate news that this page should be update with, please let us know using this .

Does Heather Graham Have the coronavirus?

Heather Joan Graham is an American actress. After appearing in television commercials, her first starring role in a feature film came in 1988 with the teen comedy License to Drive, followed by her breakthrough role in Gus Van Sant's critically acclaimed 1989 film Drugstore Cowboy. She then played a supporting roles in films such as Shout, Diggstown (1992), Six Degrees of Separation (1993), Swingers (1996) and in the television series Twin Peaks and its prequel film Fire Walk with Me (1992), before gaining critical praise in [Paul Thomas Anderson]]'s Boogie Nights (1997) as porn starlet Brandi/Rollergirl. In 1999 she co-starred in Bowfinger and Austin Powers: The Spy Who Shagged Me.