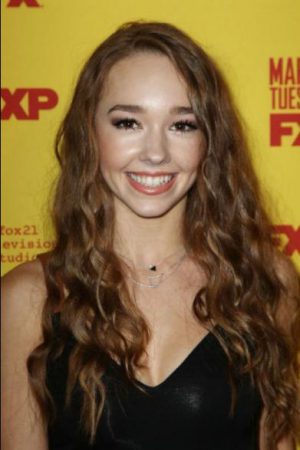 Holly is alive and kicking and is currently 24 years old.
Please ignore rumors and hoaxes.
If you have any unfortunate news that this page should be update with, please let us know using this .

Holly Taylor is a Canadian actress and dancer, born in Middleton, Nova Scotia, on Halloween 1997. Taylor began her career in the Broadway production of "Billy Elliot" at the age of 11 as "Sharon Percy" (Ballet Girl) and continued in the role for almost 2 years. Holly is now focusing more on film and television and can be seen appearing as "Paige Jennings", daughter of Keri Russell and Matthew Rhys, in the critically acclaimed FX production The Americans.
Taylor was born in Middleton, Nova Scotia, Canada, on October 31, 1997, the daughter of Margaret and Mark. She has an older brother named Philip. After her family moved to New Jersey in early 2000, she was enrolled in a dance class at age three. About a year later she surprised her parents by announcing that she was going to dance on Broadway when she grew up. By the time she was 11 years old, Taylor was dancing eight shows a week as a member of the cast of Billy Elliot at the Imperial Theatre in New York City.

She did an audition tape for the spy thriller television series The Americans in Los Angeles and booked the show after having a chance to meet the producers in New York. Taylor has lived in Wayne, New Jersey, since she was two years old. She graduated Wayne Hills High School in 2016. She is a student at Kean University in Union, New Jersey.