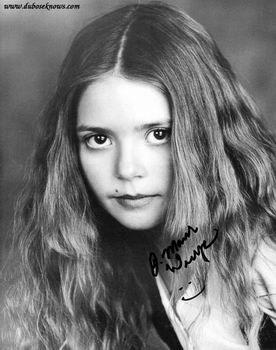 Jessica passed away on July 21, 2006 at the age of 21 in Lexington, Kentucky, USA. Jessica's cause of death was heart attack.

Jessica Madison Wright Morris as Jessica Madison Wright was an American actress. Born in Cincinnati, she spent her early years being raised in London, Kentucky.Early life She was born to parents Scott and Melissa, and had a younger sister, Victoria, and two younger brothers, Isaiah and Elijah. Madison's showbiz career started when she was five years old, as a child model, and she won a summer contract to model in New York. There she experienced her first taste of acting in television commercials. The Wright family relocated to Los Angeles in order to pursue Madison's blooming acting career. In 1994, at the age of 9, she made her acting debut in the comedy Grace Under Fire.Career success A few months later, her big break came when she was cast in the role of ten-year-old True Danziger in the science fiction television series Earth 2 by producers Cleve Landsberg, Chip Masamitsu, Janace Tashjian and Tony To. The show lasted only one season, airing between 1994 and 1995. Madison moved onto other projects, including portraying a sick child in an Emmy-nominated episode of ER, where she played the first child character to die in the show's history. Her other roles included the family film Shiloh alongside her little sister Tori Wright, the science fiction film The Warlord: Battle for the Galaxy, The Burning Zone and the 1998 Disney film Safety Patrol.Later life and death By 1999, Madison left her acting career and her family moved back to their home town in Kentucky. After repeated bouts of pneumonia and general ill-health, Madison was diagnosed with restrictive cardiomyopathy, a condition that required her to receive a heart transplant. After a short wait on the donor waiting list, the then fifteen-year-old Madison received the transplant at the Cleveland Clinic in March 2000. Clancy Brown, the actor who played the father of Madison's character in Earth 2, led an appeal to raise money to cover the Wrights' medical costs.After a quick recovery, and between concentrating on her school work and enjoying cheerleading in her extracurricular time, Madison gave talks to various groups on the importance of organ donation. After finishing at South Laurel High School, she attended the University of the Cumberlands in Williamsburg, where she studied English and worked to obtain her teaching credentials. Upon graduating from college in summer 2006, Madison planned to begin a job teaching English to tenth grade children at George Rogers Clark High School in Winchester, Kentucky.On July 8, 2006, Madison married Brent Joseph Morris, a University of Kentucky medical student. A day after she returned from her honeymoon in Hawaii, Madison suffered a heart attack and was admitted to the University of Kentucky Medical Center where she died on July 21, 2006, eight days before her twenty-second birthday. Her funeral was held at Corinth Baptist Church in London, Kentucky, the same church in which she was married, and she was buried at A. R. Dyche Memorial Park.She died of heart failure sixteen days after her Shiloh co-star Amzie Strickland, who died on July 5, 2006 at the age of 87. Madison died shortly after she received the transplanted heart.