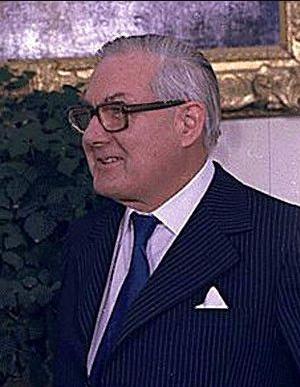 Jim Callaghan was born on 27th March 1912 in Portsmouth, Hampshire, to a Catholic father and Baptist mother. He was the only son and younger of 2 children. His father was a Royal Navy Chief Petty Officer of Irish ancestry, who died when Callaghan was aged 9. His father died when he was 9, plunging the family into poverty. They received no pension until Labour came into office in 1931 and paid the Callaghans a weekly pension of 10 shillings (then worth about $2).He had an unspectacular education at Portsmouth Northern Secondary School, and left at 16 to work as a clerk for the Inland Revenue and became involved with the union (Staff Federation). He later met Harold Laski, the Chair of the Labour Party's National Executive Committee. Laski encouraged him to stand for Parliament. Callaghan served in the Royal Navy Patrol Service in World War II from 1943, but while on leave he was able to get selected as a Parliamentary candidate for Cardiff South, later Cardiff South East. He won the seat in the 1945 UK general election. He rose steadily through the party in Opposition, and stood for the leadership after Gaitskell's death in 1963.In 1964 as Chancellor of the Exchequer, he decided not to devalue the pound, which proved to be a disastrous decision. He was forced to do so three years later and felt obliged to resign as Chancellor and became Home Secretary, where he was able to partially restore his reputation. During this time there was worsening violence in Northern Ireland and in 1969 he sent troops to the province, initially to protect the Catholic minority.In Opposition Callaghan became Shadow Foreign Secretary, and in government after 1974 it was his job to renegotiate the terms of Britains EC membership. When Harold Wilson resigned unexpectedly, Callaghan was not the favourite to win the leadership, being the oldest candidate at 64. However, he was the least divisive candidate, and won the vote.He was Prime Minister from 1976 to 1979. As a PM he presided over a sterling crisis, which led to negotiations with the IMF for a rescue package. However, problems became more difficult when Labour lost its overall small majority in 1977, following a succession of by-election defeats. They became dependent on the support of the Liberals to survive. However, Callaghan persevered in office even when this pact broke down.During the 'Winter of Discontent' in 1978, industrial action over pay policy severely damaged the governments authority. Following a loss of a confidence motion on 28 March 1979 by just one vote, Callaghan was obliged to hold a general election, which was won by Margaret Thatcher 's Conservative Party. He resigned as leader of the Labour party in September 1980, shortly after the 1980 party conference.In 1983, he became Father of the House as the longest continuously serving member of the Commons and one of only two survivors of the 1945 general election. The other one was Michael Foot , who, however, had been out of the House from 1955 to 1960. Callaghan remained an MP until the 1987 general election when he retired after forty-two years as a member of the Commons. The same year, he was elevated to the House of Lords as Baron Callaghan of Cardiff.In 1988 his wife Audrey spotted a letter to a newspaper which pointed out that the copyright of Peter Pan was about to expire. Callaghan moved an amendment to the Copyright Bill then under consideration in the Lords to extend it permanently, and this was accepted by the government. (Royalties from Peter Pan go to the Great Ormond Street Children's Hospital)He was married for 67 years to Audrey Elizabeth Moulton. They had a son and two daughters. Margaret, born in 1940, became Baroness Jay of Paddington and was Leader of the House of Lords from 1998 to 2001. Julia was born in 1943 and Michael in 1946.He died at his farm in Ringmer, East Sussex on 26 March 2005 on the eve of his 93rd birthday and just 11 days after the death of his wife Audrey.