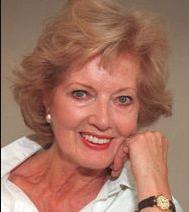 Janet McLuckie Brown (14 December 1923 – 27 May 2011) was a Scottish actress, comedian, and impressionist who gained considerable fame in the 1970s and 1980s for her impersonations of Margaret Thatcher. Brown was the wife of Peter Butterworth who was best known for his appearances in the Carry on films. Butterworth died in 1979 and Brown never remarried.