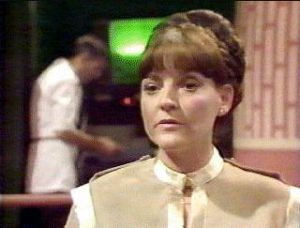 Janet Lees Price (19 April 1943 – 22 May 2012) was a British actress with many television credits to her name, including: Emergency – Ward 10, Z-Cars, The First Lady, Softly, Softly, Dixon of Dock Green, Upstairs, Downstairs, Within These Walls, Blake's 7, By the Sword Divided, The Bill and Agatha Christie's Poirot.
Appeared alongside husband Paul Darrow in the final episode of the BBC science fiction series "Blake's 7" where she played Klyn, who is gunned down by Avon (Paul Darrow).

She was married to actor Paul Darrow, best known for his role as Kerr Avon in the BBC's classic sci-fi television series Blake's 7. She died on 22 May 2012 after a long illness.