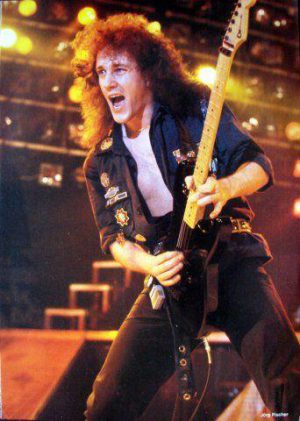 Jörg is alive and kicking.
Please ignore rumors and hoaxes.
If you have any unfortunate news that this page should be update with, please let us know using this .

Jörg Fischer (born 4 July 1957) is a German guitar player, primarily known for his work with Accept. He joined the band towards the end of the recording of their self-titled debut album and plays on the albums I'm a Rebel and Breaker until leaving before the recording of the fourth album Restless and Wild. After the recording of Balls to the Wall was completed he was asked to rejoin the band. Fischer appears on the albums Metal Heart and Russian Roulette. By this time his role had diminished mainly to rhythm guitarist, although featured on lead guitar on the songs "Living for Tonite", "Wrong Is Right', "Aiming High", "Another Second to Be" and "Lay Down the Law" (performed by Accept on UDO's Animal House album). Fischer left the band again around 1988.