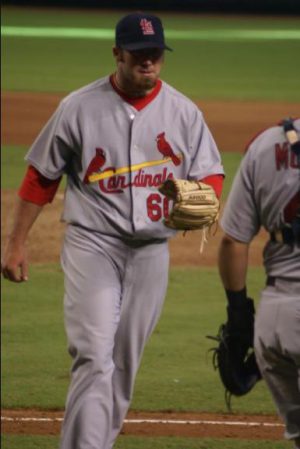 Jason is alive and kicking and is currently 40 years old.
Please ignore rumors and hoaxes.
If you have any unfortunate news that this page should be update with, please let us know using this .

Jason Louis Motte (born June 22, 1982) is an American professional baseball relief pitcher for the Chicago Cubs of Major League Baseball (MLB). He previously played for the St. Louis Cardinals. The Cardinals drafted him as a catcher in 2003 and he converted to pitching in 2006. Motte played a key role in the 2011 World Series championship run, saving five postseason games. In 2012, he led the National League (NL) in saves with 42. Motte had surgery to repair an ulnar collateral ligament injury that kept him from playing all of 2013. After returning to the Cardinals midway through the 2014 season, Motte signed a one-year, $4.5 million deal with the Cubs for 2015.