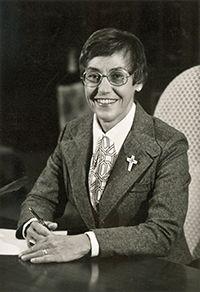 Sister Jeanne Knoerle, S.P., (February 24, 1928 – June 10, 2013) was an author, educator and theologian. A Roman Catholic Religious Sister, she was a member of the Sisters of Providence of Saint Mary-of-the-Woods. She was president of Saint Mary-of-the-Woods College in Indiana from 1968 to 1983. Other posts were with the Association of Catholic Colleges and Universities (board chair, 1979–80) and with the Lilly Endowment.