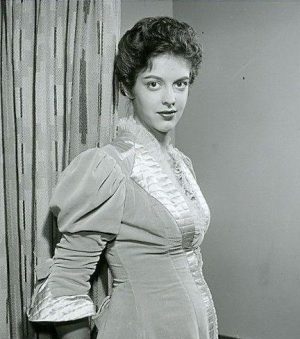 Jeanne is alive and kicking and is currently 90 years old.
Please ignore rumors and hoaxes.
If you have any unfortunate news that this page should be update with, please let us know using this .

Jeanne Vaughn is an actress, known for The Great Adventure (1963), The Wild Wild West (1965) and Princess of the Nile (1954). Princess of the Nile is a 1954 American adventure film starring Debra Paget.
The Wild Wild West is an American science fiction western television series that ran on the CBS television network for four seasons from September 17, 1965 to April 4, 1969. Two television films were made with the original cast in 1979 and 1980 and the series was adapted for a feature-length film in 1999.

She is former Miss Louisiana, first runner up in the 1952 Miss USA pageant, and Miss Congeniality in 1953. Miss USA 1952, the 1st Miss USA pageant, was held on 27 June 1952 at Long Beach Municipal Auditorium, Long Beach, California. 42 states competed for the inaugural Miss USA.