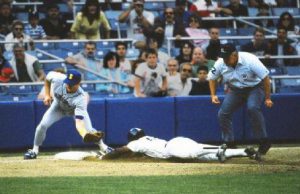 James is alive and kicking and is currently 61 years old.
Please ignore rumors and hoaxes.
If you have any unfortunate news that this page should be update with, please let us know using this .

James Arthur Presley (born October 23, 1961) is a former Major League Baseball infielder with an eight-year career from 1984 to 1991. He played for the Seattle Mariners of the American League and the Atlanta Braves and San Diego Padres of the National League. He was primarily a third baseman but also saw some time playing first base. His nickname was "Hound Dog".