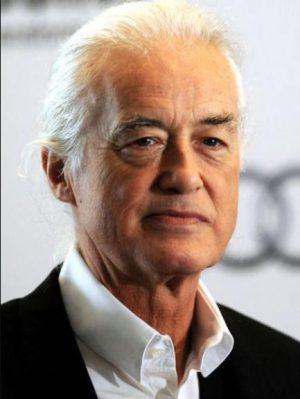 Jimmy is alive and kicking and is currently 78 years old.
Please ignore rumors and hoaxes.
If you have any unfortunate news that this page should be update with, please let us know using this .

Does Jimmy Page Have the coronavirus?

James Patrick "Jimmy" Page, Jr., is an English musician, songwriter, multi-instrumentalist, and record producer who achieved international success as the guitarist and founder of the rock band Led Zeppelin.
Page is widely considered to be one of the greatest and most influential guitarists of all time. Rolling Stone magazine has described Page as "the pontiff of power riffing" and ranked him number three in their list of the "100 Greatest Guitarists of All Time", behind Jimi Hendrix and Eric Clapton. In 2010, he was ranked number two in Gibson's list of "Top 50 Guitarists of All Time" and, in 2007, number four on Classic Rock's "100 Wildest Guitar Heroes". He was inducted into the Rock and Roll Hall of Fame twice; once as a member of the Yardbirds (1992) and once as a member of Led Zeppelin (1995).

An early 1960s companion was American recording artist Jackie DeShannon, possibly the inspiration for the Page composition and Led Zeppelin recording "Tangerine".
French model Charlotte Martin was Page's partner from 1970 to about 1982 or 1983. Page called her "My Lady". Together they had a daughter, Scarlet Page (born in 1971), who is a photographer. Also during the 1970s, Page had a well-documented, several-year-long relationship with "baby groupie" Lori Mattix, beginning when she was 13 or 14 and while he was an adult in his twenties. In light of the Me Too movement four decades later, this attracted renewed attention as statutory rape.
From 1986 to 1995, Page was married to Patricia Ecker, a model and waitress. They have a son, James Patrick Page (born April 1988). Page later married Jimena Gómez-Paratcha, whom he met in Brazil on the No Quarter tour. He adopted her oldest daughter Jana (born 1994) and they have two children together: Zofia Jade (born 1997) and Ashen Josan (born 1999). Page and Gómez-Paratcha divorced in 2008.
Page has been in a relationship with actress and poet Scarlett Sabet since 2015.