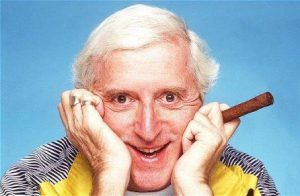 Sir James Wilson Vincent "Jimmy" Savile, OBE, KCSG (/ˈsævəl/, /ˈsævɪl/; 31 October 1926 – 29 October 2011) was an English DJ, television and radio personality, dance hall manager, and charity fundraiser. He hosted the BBC television show Jim'll Fix It, was the first and last presenter of the long-running BBC music chart show Top of the Pops, and raised an estimated £40 million for charities. At the time of his death he was widely praised for his personal qualities and as a fund-raiser. After his death, hundreds of allegations of sexual abuse were made against him, leading the police to believe that Savile was a predatory sex offender—possibly one of Britain's most prolific. There had been allegations during his lifetime, but they were dismissed and accusers ignored or disbelieved; Savile took legal action against some accusers.