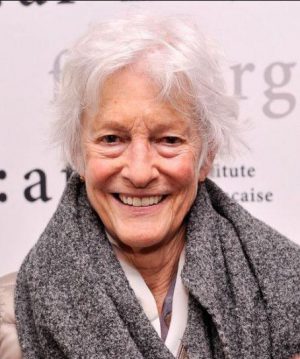 Joan is alive and kicking and is currently 86 years old.
Please ignore rumors and hoaxes.
If you have any unfortunate news that this page should be update with, please let us know using this .

Joan Jonas is an American visual artist and a pioneer of video and performance art who is one of the most important female artists to emerge in the late 1960s and early 1970s. Jonas' projects and experiments provided the foundation on which much video performance art would be based. Her influences also extended to conceptual art, theatre, performance art and other visual media. She lives and works in New York and Nova Scotia, CanadaEarly life and educationJonas was born in 1936 in New York City. In 1958 she received a bachelor's degree in Art History from Mount Holyoke College in South Hadley, Massachusetts. She later studied sculpture and drawing at the School of the Museum of Fine Arts in Boston and received an MFA in Sculpture from Columbia University in 1965. Immersed in New York's downtown art scene of the 1960s, Jonas studied with the choreographer Trisha Brown for two years. Jonas also worked with choreographers Yvonne Rainer and Steve Paxton.WorkThough Jonas began her career as a sculptor, by 1968 she moved into what was then leading-edge territory: mixing performance with props and mediated images, situated outside in natural and/or industrial environments. Between 1968-1971, Jonas performed Mirror Pieces, works which used mirrors to as a central motif or prop. In these early performances, the mirror became a symbol of (self-)portraiture, representation, the body, and real vs. imaginary, while also sometimes adding an element of danger and a connection to the audience that was integral to the work. In Wind (1968), Jonas filmed performers stiffly passing through the field of view against a wind that lent the choreography a psychological mystique.In 1970, Jonas went on a long trip to Japan — where she bought her first video camera and saw Noh, Bunraku and Kabuki theater — with the sculptor Richard Serra. Her video performances between 1972 and 1976 pared the cast down to one actor, the artist herself, performing in her New York loft as Organic Honey, her seminal alter-ego invented as an "electronic erotic seductress," whose doll-like visage seen reflected bits on camera explored the fragmented female image and women’s shifting roles. drawings, costumes, masks, and interactions with the recorded image were effects that optically related to a doubling of perception and meaning. In one such work, Organic Honey's Visual Telepathy (1972), Jonas scans her own fragmented image onto a video screen. In Disturbances (1973), a woman swims silently beneath another woman's reflection. Songdelay (1973), filmed with both telephoto and wide-angle lenses (which produce opposing extremes in depth of field) drew on Jonas' travels in Japan, where she saw groups of Noh performers clapping wood blocks and making angular movements. In a video interview for MoMA, Jonas described her work as androgynous; earlier works were more involved in the search for a feminine vernacular in art, she explains, and, unlike sculpture and painting, video was more open, less dominated by men.In 1975, Jonas appeared as a performer in the movie Keep Busy, by the photographer Robert Frank and novelist-screenwriter Rudy Wurlitzer. In 1976 with The Juniper Tree, Jonas arrived at a narrative structure from diverse literary sources, such as fairy tales, mythology, poetry, and folk songs, formalizing a highly complex, nonlinear method of presentation. Using a colorful theatrical set and recorded sound, The Juniper Tree retold a Grimm Brothers tale of an archetypal evil stepmother and her family.In the 1990s, Jonas’ My New Theater series moved away from a dependence on her physical presence. The three pieces investigated, in sequence: a Cape Breton dancer and his local culture; a dog jumping through a hoop while Jonas draws a landscape; and finally, using stones, costumes, memory-laden objects, and her dog, a video about the act of performing. She also created 'Revolted by the Thought of Known Places... (1992) and Woman in the Well (1996/2000).In her installation/performance commissioned for Documenta 11, Lines in the Sand (2002), Jonas investigated themes of the self and the body in a performance installation based on the writer H.D.’s (Hilda Doolittle) epic poem "Helen in Egypt" (1951–55), which reworks the myth of Helen of Troy. Jonas sited many of her early performances at The Kitchen, including Funnel (1972) and the screening of Vertical Roll (1972). In The Shape, The Scent, The Feel of Things, produced by The Renaissance Society in 2004, Jonas draws on Aby Warburg's work on Hopi imagery.Since 1970, Jonas has spent part of every summer in Cape Breton, Nova Scotia. She has lived and worked in Greece, Morocco, India, Germany, the Netherlands, Iceland, Poland, Hungary, and Ireland.Jonas’ works were first performed in the 1960s and '70s for some of the most influential artists of her generation, including Richard Serra, Robert Smithson, Dan Graham and Laurie Anderson. While she is widely known in Europe, her groundbreaking performances are lesser known in the United States, where, as critic Douglas Crimp wrote of her work in 1983, "the rupture that is effected in modernist practices has subsequently been repressed, smoothed over." Yet, in restaging early and recent works, Jonas continues to find new layers of meanings in themes and questions of gender and identity that have fueled her art for over thirty years.For the season 2014/2015 in the Vienna State Opera Joan Jonas designed a large-scale picture (176 sqm) as part of the exhibition series "Safety Curtain", conceived by museum in progress.Jonas' was also featured as a choreographer for Robert Ashley's Opera titled Celestial Excursions in 2003TeachingFrom 1993, the New York-based Jonas spent part of each year in Los Angeles, teaching a course in New Genres at the UCLA School of the Arts. In 1994, she was made a full professor at the Staatliche Akademie der Bildenden Künste in Stuttgart, Germany. Since 1998, she has been a professor of visual arts at the Massachusetts Institute of Technology (MIT).

Tags: American Born in 1936 Visual artist and a pioneer of video and performance art