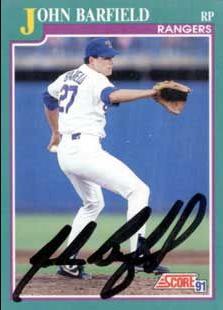 John is alive and kicking and is currently 57 years old.
Please ignore rumors and hoaxes.
If you have any unfortunate news that this page should be update with, please let us know using this .

John David Barfield (born October 15, 1964) is a retired Major League Baseball pitcher. He played during three seasons at the Major League level for the Texas Rangers. He was drafted by the Rangers in the 11th round of the 1986 amateur draft. Barfield played his first professional season with their Class A-Advanced Daytona Admirals and Salem Redbirds in 1986, and his last with the Cleveland Indians' Triple-A Buffalo Bisons in 1997.