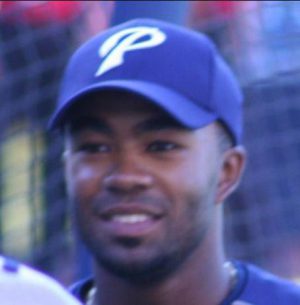 Josh is alive and kicking and is currently 39 years old.
Please ignore rumors and hoaxes.
If you have any unfortunate news that this page should be update with, please let us know using this .

Joshua LaRoy Barfield (born December 17, 1982) is a former American professional baseball second baseman. He is the son of former major league outfielder Jesse Barfield. Barfield was born in Venezuela during his mother's two-week winterball visit with his father. He attended Klein High School in Harris County, Texas and holds the District 5 single season home run record.
Barfield was drafted in the fourth round of the 2001 Major League Baseball draft by the San Diego Padres. In 2004 and 2005, Baseball America listed him as the Padres' number one prospect. In 2006, he fell to third in the organization behind pitcher Cesar Carrillo and catcher George Kottaras.

On November 8, 2006, Barfield was traded to the Cleveland Indians for third baseman Kevin Kouzmanoff and pitcher Andrew Brown. Barfield began the 2007 season as the Indians everyday second baseman, but in August, after poor hitting, lost the job to Asdrúbal Cabrera. He finished 2007 with a .243 batting average, 3 home runs, and 53 RBI. Barfield entered spring training in 2008 as a utility player hopeful, but was ultimately optioned to Triple-A Buffalo.
Barfield was called up by Cleveland on June 9, 2008, to replace Cabrera, who was hitting a team low .184. At the time of his call-up, Barfield had an average of .255 with 5 homers and 21 RBI, respectively, for Buffalo. In his second game after being called up, he sprained a finger and was placed on the disabled list on June 12, 2008.